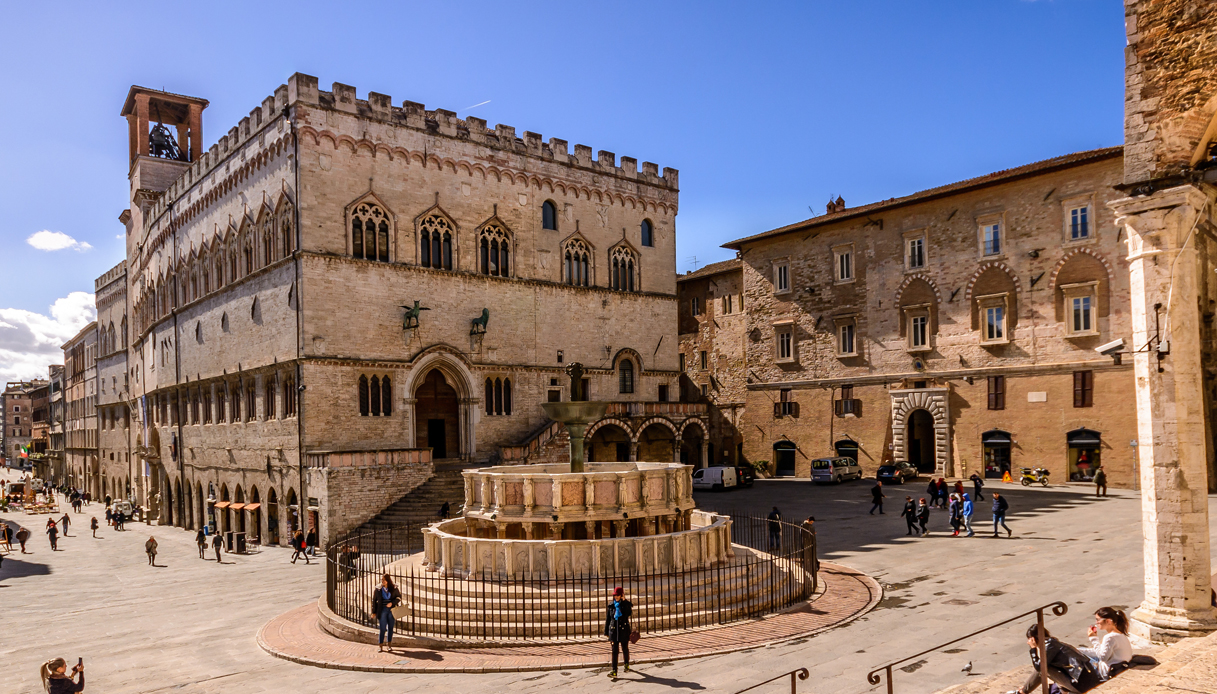 (45min from the farmhouse)

Perugia, a city of Etruscan Roman origin and capital of the Umbria region, is home to one of the oldest universities in Europe (founded in 1308). The city centre is made up of the splendid Piazza IV Novembre, where the most illustrious monuments are located: in the middle is the Fontana Maggiore (one of the most beautiful fountains of the thirteenth century, rich in bas-reliefs), to the north the side of the Cathedral of San Lorenzo with the Loggia di Fortebraccio and the former Seminary, to the west the Palazzo Arcivescovile, to the south the Palazzo Comunale whose side extends into Corso Vannucci, to the east a series of ancient buildings including the Collegio dei Notari. The Palazzo Comunale is a mighty 13th century building; to visit the magnificent Sala dei Notari on the first floor, on the third floor you will find the Galleria Nazionale dell’Umbria (the most important existing collection of Umbrian paintings, there are many works by Pinturicchio, Perugino and Signorelli) and on the ground floor the Sala del Collegio della Mercanzia (with a rich 15th century decoration). In Corso Vannucci is the entrance to the Collegio del Cambio, the ancient seat of the moneychangers of 1452 (the Sala dell udienza del Cambio, at times ogival, decorated with frescoes by Perugino). In Piazza Matteotti there is the Palazzo dell’Università Vecchia (seat of the University of Perugia from 1453 to 1811) and, in continuity with this, the elegant Palazzo del Capitano del Popolo. In Piazza Braccio Fortebraccio stands the Palazzo Gallenga Stuart (a sumptuous baroque building, today the seat of the Italian University for Foreigners), but above all the Etruscan Arch (a mighty monumental construction of the walls of ancient Perusia). At the end of Via del Tempio stands the suggestive church of Sant’Angelo, a singular early Christian building (originally from the 6th century, with a Gothic portal from the 14th century). Continue the visit taking you to the southern quarters of the city, which can be reached from the centre by the Via Marzia, which descends along the mighty spurs of the Rocca Paolina and where you will find the Porta Marzia (2nd century B.C.), from which you can access the underground Via Bagliona (which takes place within the perimeter of the Rocca Paolina with a very suggestive route in a medieval and 16th century environment). In Piazza Giordano Bruno stands the basilica of San Domenico (with a mighty bell tower, the interior is in the shape of a Latin cross with a nave and two aisles 122 m long), on the left of which there is access to the National Archaeological Museum of Umbria (includes an Etruscan-Roman section and a prehistoric section). Continuing along Corso Cavour you reach Porta San Pietro, which actually consists of two doors, the 14th century internal door and the Renaissance external door. Not far away stands the complex of the convent and the basilica of St. Peter’s (considered the most beautiful in Perugia, it has a hexagonal bell tower; the interior, with three naves divided by 18 Ionic columns of grey marble and oriental granite, is adorned with numerous valuable works of art).

Just 7 km from the historical centre is the Ipogeo dei Volumni, one of the best examples of a noble Etruscan tomb (2nd century B.C.). The tomb, dug into the ground and 4 m high for 100 square meters of surface, contains well-preserved Etruscan sculptures, including seven cinerary urns.