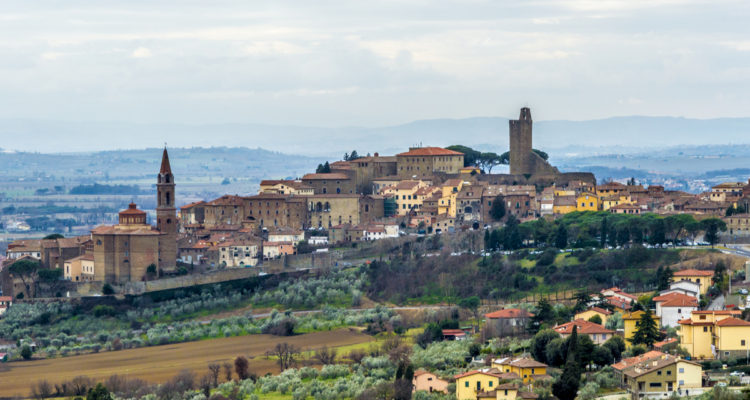 A small town surrounded by walls and characteristic for the 14th and 15th century towers on which the ancient keep stands; the structure of the village is well preserved, with its narrow streets flanked by ancient houses and palaces. In the central Piazza del Municipio there are the Logge del Vasari of the 16th century, made of sandstone with coats of arms of commissioners and podestà and a fresco of the Annunciation; in front of the loggias, there is the Palazzo Comunale (it contains the municipal picture gallery, with valuable works of art). Following the road to the right of the palace you go up to the Cassero (XII century), with a massive tower with hewn stones. At the end of Corso Italia, you reach the Porta Fiorentina, flanked by a mutilated tower, before which you climb up to the square on which the Romanesque church of San Francesco, containing a beautiful painting of St. Francis, by Margheritone d’Arezzo. On a hill parallel to that of Castiglion Fiorentino, stands the Castle of Montecchio Vesponi (XI century very suggestive the crenellated walls, 263 m long).