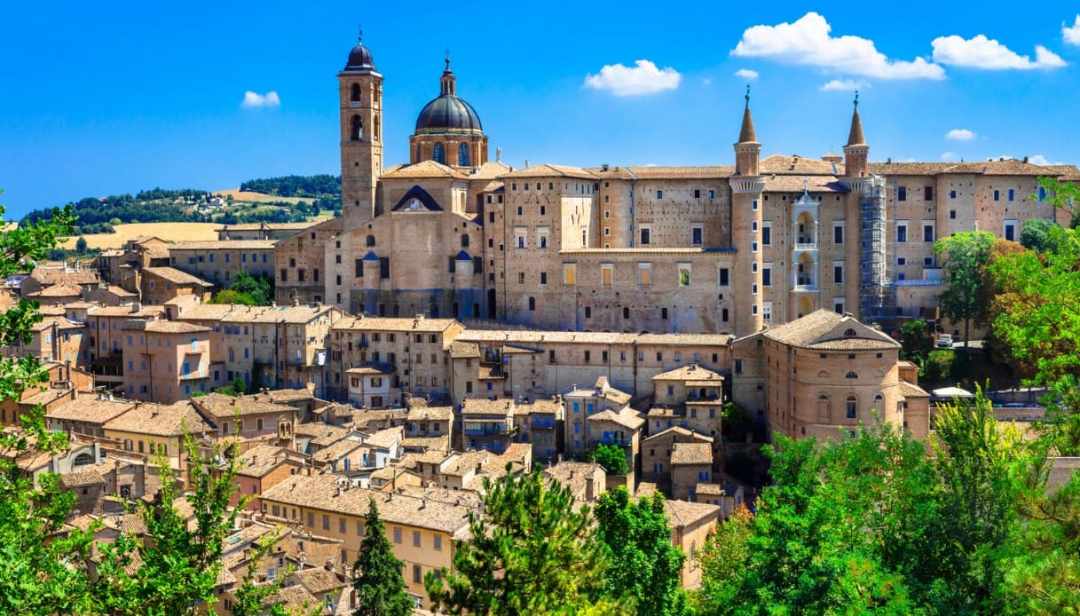 The history and artistic fortunes of Urbino are closely linked to the Montefeltro family, who had it as a feud in 1213. The most illustrious personage was Duke Frederick (1444-82), a perfect example of a Renaissance prince, who made his court a cenacle of artists and men of letters. Under him was erected the splendid Ducal Palace, the greatest monument of the city, begun in 1465, equipped with two characteristic cylindrical towers with conical points. The palace is home to the Galleria Nazionale delle Marche, whose entrance leads into the magnificent porticoed courtyard on columns with beautiful capitals; the monumental staircase, decorated by Barocci, leads up to the loggia, where the beautiful inlaid doors of the various rooms that house the Gallery open. The Gallery contains first-rate works by artists of the calibre of Raphael, Piero della Francesca, Giusto di Gand, Titian, Barocci. The Cathedral, almost entirely rebuilt at the end of the 18th century in neoclassical forms, has a three-aisled interior with a dome and a beautiful crypt made up of 4 chapels. The Oratory of St. John the Baptist (dating back to the end of the 14th century) is also worth a visit, with a wooden ceiling entirely covered with valuable frescoes, and contains Brandani’s crib, a work in stucco of the finest modelling. If you have time, you can also see the church of San Francesco (dating back to the 14th century, it has a beautiful portico with wide arches and a cusped bell tower) and the house of Raffaello (where the famous artist was born and some of his minor works are preserved).

Once you have finished your visit to Urbino, if you still have time, we suggest you go to Fossombrone and the nearby Furlo Gorge. Just 15min from Urbino, Fossombrone boasts a valuable historical centre adorned with Renaissance buildings such as: the Corte Bassa (ancient residence of the Dukes of Urbino), the Corte Rossa (it was the residence of Cardinal Giulio della Rovere), the Corte Alta (it houses the Vernarecci Civic Museum) and the Palazzo Pergamino (it houses the Quadreria Cesarini and the Pinacoteca Comunale). However, the greatest attraction of the area is undoubtedly the Furlo Gallery: situated in the gorge of the Candigliano river, it was dug into the rock by the Romans in 76 A.D. to allow the passage of the Via Flaminia; the passage is 39m long by 6m high.