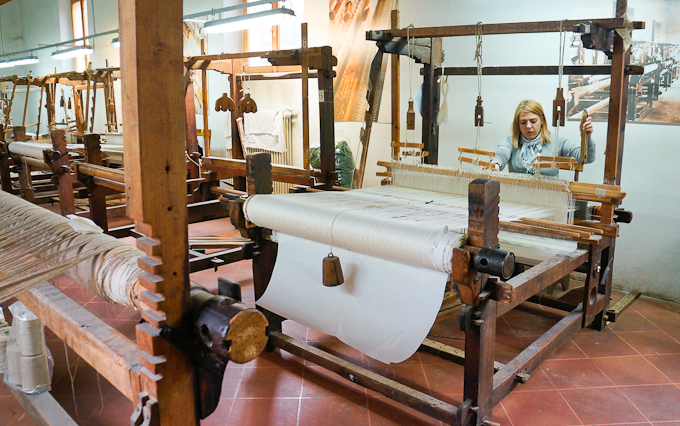 The Laboratorio Tela Umbra, founded in 1908 by Baroness Alice Hallgarten and her husband Leopoldo Franchetti, is a unique historical and productive experience. It is the only workshop in which pure linen is handcrafted using handlooms from the late 19th century, using original designs from the medieval and Renaissance periods.

Alice Hallgarten Franchetti, a young American in love with Italy, spends entire afternoons walking in the countryside, visiting poor houses where illiteracy and disease make life already hard. She meets women who tell her about the hardships their families are forced to endure while, sitting at the loom, they weave fabrics with art and skill handed down through generations. It is from these encounters that the passion that Alice’s life and those who follow her in the company will mature radically. The intuition, already clear in her, to allow mothers to exercise that art as at home, next to their children, comes to life; but this time with efficient tools, in a healthy and organized environment as a company able to sustain itself over the years. The friendship with Maria Montessori and the knowledge of the thought of that young pedagogue will then be precious to her. At that moment, that very special example of integration between art and humanity was born, which still lives today under the name of Tela Umbra.