THE MADONNA OF DONATELLO – Citerna 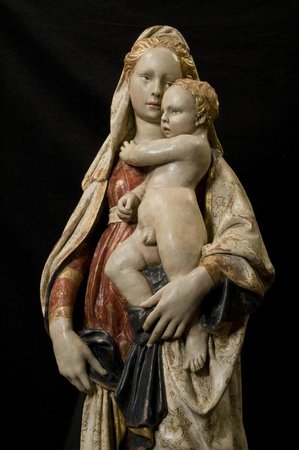 THE MADONNA OF DONATELLO – Citerna

The Madonna of Citerna is certainly one of the most fascinating and daring discoveries in the field of art in recent years, a discovery that has revealed to the public a masterpiece of undoubted artistic and cultural value. It was in 2004 when the volume Madonna di Citerna, Donatello’s unpublished terracotta, dedicated to the statue found inside the Church of San Francesco, the result of a scientific study by Laura Ciferri, was presented to the public, in the context of a research project aimed at establishing a corpus of heavy terracotta artefacts in Umbria in the 15th and 16th centuries, publication of which included important essays by Alfredo Bellanti, Corrado Fratini and Giancarlo Gentilini, which confirmed and confirmed with further comparisons and theories both the attribution and dating.

This was the beginning of a long journey, made up of studies, in-depth analysis and skilful work carried out by the Opificio delle Pietre dure of Florence, where the statue arrived, thanks to the will of the then Superintendent of the OPD Cristina Acidini, at the restoration sector of Plastic and Ceramic Materials, directed by Laura Speranza. The high professionalism of the restoration sector, with the wise dedication of Rosanna Moradei and Akiko Nishimura, and a painstaking and prudent work, have restored to the public’s vision a sculptural complex of fascinating beauty.