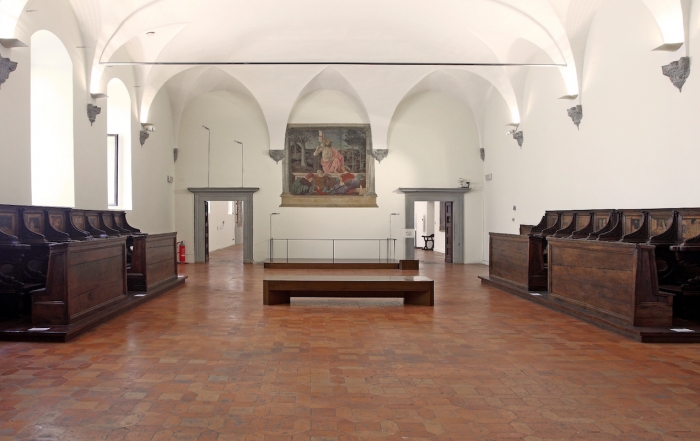 The origins of the building that houses the Civic Museum of Sansepolcro are fourteenth-century.

The rebuilding, above a previous building, was carried out at the behest of Galeotto Malatesta, around the early 1300s.

Evidence of these historical origins are the underground rooms, once stables of the palace and which today house the treasure of the cathedral with the apparatus of Roberto Maria Costaguti (1732-1818) bishop of Sansepolcro from 1778 to 1818. The present building underwent various modifications over the centuries, not all of which are easily identifiable. In the fifteenth-century reconfiguration, when the Palazzo della Residenza was completely reorganised, the Sala dei Conservatori del Popolo, which boasts on the back wall the famous Resurrezione di Cristo (Resurrection of Christ), created around 1460 by the Tuscan master Piero della Francesca (c.1415 -1492), was redefined. Thanks to the location of the extraordinary work of the artist of Sansepolcro, the idea by the municipal administration of the time to collect a group of works of art, which gave life to the first nucleus of the Municipal Picture Gallery, was born at the end of the nineteenth century. In the following centuries, until the twentieth century, there were other interventions that led the Palace to assume its present appearance.

The Civic Museum houses a considerable artistic heritage, with an impressive collection of works ranging from the 14th to the 20th century: the altarpiece of Saints Peter and Paul by Matteo di Giovanni (1430?-1495), the altarpiece with the Annunciation, Adoration of the Shepherds, Angels and Saints by Andrea della Robbia (1435-1525?), the Madonna del Soccorso by Gerino da Pistoia (1480-1529? ), the Martyrdom of San Quintino by Jacopo Carucci known as Pontormo (1494-1557), the Annunciation of Saints by Tito (1536-1603), the Adoration of the Magi by Leandro da Ponte known as Bassano (1557-1622), the Crucifixion and Saints (from the workshop) by Domenico Cresti known as Passignano (1559-1638), finally Giovan Battista Mercati (1591-1645) with the Immaculate Conception and Saints and the Assumption and Coronation of the Virgin by Raffaellino del Colle (1594? -1566).  An unfailing glance is reserved for the 14th century frescoes (currently under study) from various churches in the town and located on the top floor of the Museum and the small archaeological collection of local finds. Certainly the most interesting part is that dedicated to Piero della Francesca, born and raised in Sansepolcro. The Sala dei Conservatori also offers two other extraordinarily interesting fresco fragments by Piero della Francesca: the San Giuliano (c. 1455) and the San Ludovico (1460). Without forgetting, in the room next to the latter, the equally famous Polyptych of Mercy (1445-1454) also by Piero della Francesca.