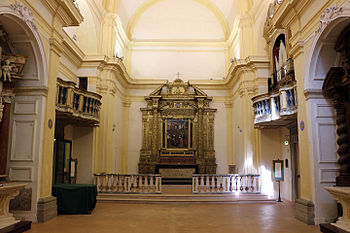 The museum is set up inside the Church of Santa Croce, the ancient oratory of the homonymous confraternity. The Umbertide museum is part of the unique ticket of the Terre & Musei dell’Umbria circuit.

The fourteenth-century church of Santa Croce houses the City Museum. The altarpiece of the Deposition on the high altar, painted by Luca Signorelli in 1516, is the only one of the many works on wood by the master from Cortona still in its original site. The same characteristic, quite unusual for a museum, also occurs for the paintings on the side altars. Other works from the nearby church of San Francesco are of great importance in the Museum, including a painting by Niccolò Circignani known as the Pomarancio, depicting the Madonna and Child in Glory.

The museum of Santa Croce also has an important archaeological section: ceramic materials from the protohistoric age to the Hellenistic and Roman period.