MUSEUM OF THE BATTLE OF ANGHIARI 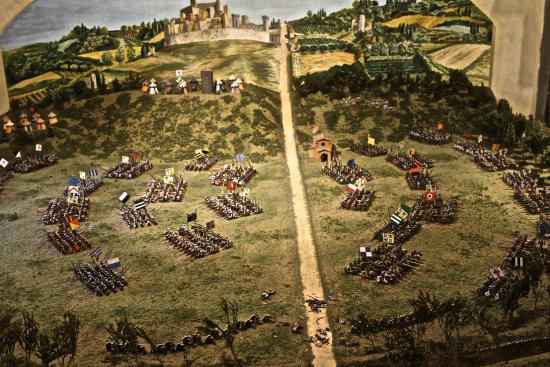 MUSEUM OF THE BATTLE OF ANGHIARI

There are many important works that the palace hosts:

The Pleistocene Bifacial: on display is a selection of the most significant pieces from a collection of over 8000 instruments and splinters, belonging to the former “Centro Studi Archeologici e Naturalistici Altotiberino”. It is made up of: points, scrapers, toothbrushes, levallois nuclei and bifacials. The basin where these were found is all inscribed in the territory of the current municipality of Anghiari.

The Roman Room: It includes the testimonies of Roman civilization in the territory of Anghiari, ranging from the discovery of coins of the imperial and post-imperial age, parts of ceramic objects of various invoice, rock crystal artefacts, up to marble elements, such as parts of frames and a stone. It is a room in continuous change thanks to the evidence found in excavations still in progress.

Catorcio di Anghiari: symbol of the bellicose struggles, typical of Tuscany, was at the centre of the disputes between Anghiari and the nearby Sansepolcro. It also became a literary theme when a seventeenth-century poet, Federigo Nomi, made a heroicomic poem, called “Catorceide” or “Catorcio d’Anghiari” in which the events between the two Tuscan villages are told in eighth rhyme.

The Battle of Anghiari and Leonardo da Vinci: Presents the theme of the battle, fought in Anghiari by the Florentines and Milanese on 29 June 1440, from different perspectives: historical, military historian, and artistic. It illustrates the techniques of war; Leonardo’s genius in representing the brutality of man through the unfortunate feat of the oil fresco in the Salone dei Cinquecento in Florence, the historical importance of this event for the history of Tuscany.

The Taglieschi Code: the 17th century cabreo documents the properties of the Taglieschi family. Illustrated with coloured drawings it is a very important document for the knowledge of the local history and the economic history of the Grand Duke of Tuscany.

Collection of Firearms: It preserves examples mostly made in Anghiari at the end of the XVIII century. It documents the skill of the Anghiarian workshops of the Vallini, Carboncelli, Guardiani, Matassi, workshops that combined technical manufacturing skills with great artistic skills in chiselling, engraving and burling.