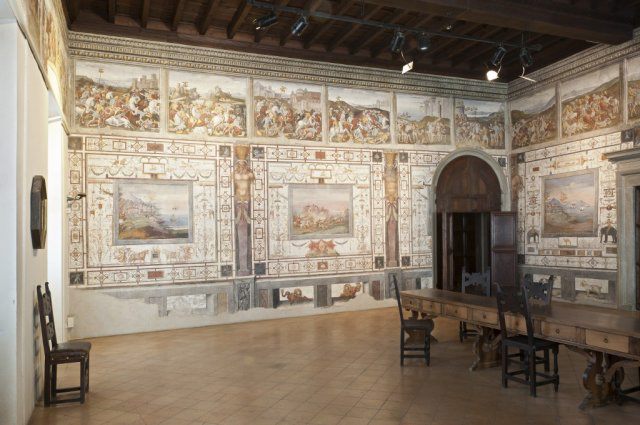 The Municipal Picture Gallery was housed in its present location when in 1912 Elia Volpi, internationally renowned painter, restorer and antiquarian, donated the sixteenth century Palazzo Vitelli to the Town Hall. Built at different times, the building took on its definitive appearance in the first half of the sixteenth century and was so named because of its proximity to a foundry or cannon depot. The Palace, a noble example of a Renaissance residence, was built on the occasion of the wedding of Alessandro Vitelli and Angela Paola dei Rossi di San Secondo Parmense. Richly frescoed, it is characterised by the graffito decoration of the facade overlooking the garden by Cristofano Gherardi, known as il Doceno, designed by Vasari. Vases, masks, plant motifs, cherubs, cornucopias and birds flank the coats of arms and symbols of the noble Tifernate family. The staircase that gives access to the main floor is splendidly frescoed with a complex celebrative and symbolic decoration: Sybils and Prophets, Apollo and the Muses, Wise men and Emperors of antiquity who are attributed to Cola dell’Amatrice and Gherardi. The collection of works preserved here is, for importance, second in Umbria only to the National Gallery of Perugia. The large altarpiece with the “Madonna enthroned” with Child and six angels by the Master of Città di Castello, faithful follower of Duccio di Boninsegna, is the oldest painting preserved here. It is followed by works by Spinello Aretino, Giorgio di Andrea di Bartolo, Antonio Alberti da Ferrara, Neri di Bicci and Antonio Vivarini. The only example of goldsmith’s art is the “Reliquary of the arm of Saint Andrew”, dated 1420, attributed to the Florentine sculptor Lorenzo Ghiberti.