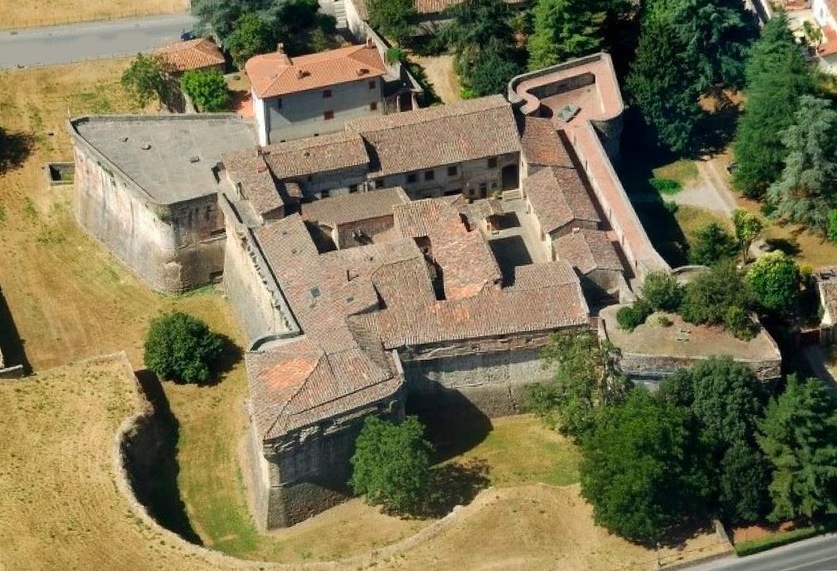 From Sangallo to Sansepolcro.

Going south along via Niccolò Aggiunti, right on the final part we will meet the Medici fortress of Giuliano Giamberti da Sangallo (1445-1516), dating back to the beginning of 1500. The first fortress was built by the Malatesta family, between the 14th and 15th centuries, on a previous fortified structure.

With its irregular quadrilateral shape, the fortress is an excellent example of “modern” military architecture, that is to say, it presents both new and retrofitting architectural solutions, derived from the need of military architecture to adapt to the new and more powerful firearms, used both for defence and attack.

Looking at the fortress from the side of Via dei Molini, the seam between the previous fifteenth century wall, so called “piombante” for defence and the next sixteenth century wall with a masonry mainly made of stone and bricks, is still visible.

The pre-existing central formwork was cut to make it less exposed to artillery fire.

A deep moat could be flooded if necessary, exploiting the water that fed the mills (hence the name of the nearby road).

The bastion of Santa Maria, facing the city, is the smallest of the four, but certainly the most singular and important, since it was not much altered and it has the structure given to it by Sangallo in the shape of a heart; the muzzle mouths of the cannons placed in the strut’s mast are clearly visible, invented by Giuliano to make them more hidden and allow for grazing defence.

The bastion of San Leo, on the other hand, underwent important and accurate studies which highlighted how Sangallo had designed it in a cylindrical manner, referring to other structures built in Tuscany and which was later, so to speak, “encased” by the local architect Alberto Alberti, who was responsible for improving the fortress in 1561.

The bastion of San Casciano, also remodeled, still has the shape of a St. Gallic heart.

The bastion of Belvedere is the largest of the four, built entirely in bricks and probably from a later period; it was much strengthened compared to the others, because it was directly exposed to attacks from the plain and also in this case the original of Sangallo was incorporated by the more modern structure.

Inside the fortress there is a very suggestive medieval courtyard to crown the thirteenth-century structure close to the strut of San Casciano.

Moreover, in the middle of the 16th century, Alberti made further important changes to the work carried out by Sangallo, in particular with the construction of the rivellino, a polygonal defensive structure located near the San Casciano rafter, surrounded by very high retaining walls near the ditch which formed an embankment descending towards the outside, still partly visible today.

From the eighteenth century onwards the defensive requirements were less and less and the structure was sold and transformed in the nineteenth century into an agricultural farm, and today it is privately owned.