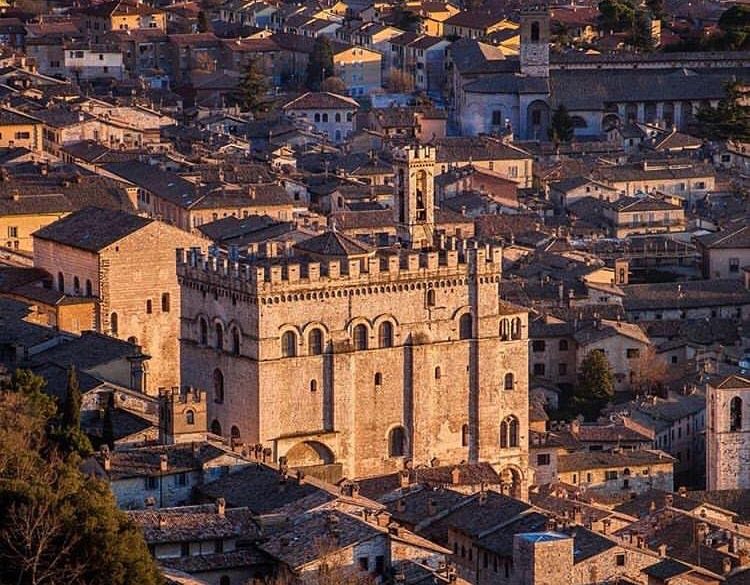 (50min from the farmhouse)

Gubbio is one of the most characteristic cities of Umbria, on the edge of a beautiful plain and at the foot of Mount Ingino, full of charm for its intact, genuine medieval appearance and noble monuments; on May 15th, the eve of Saint Ubaldo, patron saint of the city, Gubbio is the scene of the famous candles race. The artisan manufacture of ceramics thrives there. The itinerary starts from Piazza dei Quaranta Martiri, where there is the church of San Francesco, a gothic building of the 13th century with an octagonal bell tower; inside there are remarkable frescoes in the left apse of Nelli and those on the life of St. Francis in the chapel of the right apse. On the opposite side of the square there is the ancient loggia of the Tiratori dell’Arte della Lana, with a long and rustic portico. Continue to Piazza della Signoria: it opens like a balcony onto the plain below, is dominated by the bulk of the Palazzo dei Consoli and, opposite, the Palazzo Pretorio. The Palazzo dei Consoli is one of the most beautiful palaces in Italy: built in the 14th century, it is crowned by battlements and an elegant tower; the palace houses the museum and the municipal art gallery, where you can admire Roman and medieval marbles, the famous Eugubine plates (7 bronze plates with inscriptions in Umbrian and Latin characters), paintings of the Eugubine and Tuscan school. To see the Duomo, with its ogival portal and thirteenth century sculptures around the rose window of the façade. The interior has a single, wide nave with grandiose ogival arches supporting the roof, and houses a museum containing a magnificent cope of 16th century Flemish art. Not to be missed is the Ducal Palace, built in 1476 by the Montefeltro family in imitation of the one in Urbino. The exterior is of little importance, but the internal courtyard is splendid, with a portico on columns on three sides, of very elegant Renaissance forms, enhanced by the dichromy of pietra serena and brick red. The historical centre is crossed by picturesque medieval streets, all to be explored. Via dei Consoli is surrounded by houses, all ancient, of perfect ashlar masonry; in a wide street with a pretty fountain stands the valuable Palazzo del Bargello (XIII century). Via Galeotti joins the Via dei Consoli and takes place for characteristic dark and silent angiporti. Via Baldassini, also flanked by houses dating back to the 13th and 14th centuries, on which the Palazzo dei Consoli, Piazza della Signoria (supported by 4 colossal arches) and the Palazzo Comunale (Town Hall) overhang with impressive effect. Of secondary interest, to visit if you have time: Via Savelli della Porta (note the elegant Renaissance portal of the Palazzo della Porta and the small church of Santa Maria Nuova, which houses the suave fresco of the Madonna del Belvedere, a masterpiece by Nelli), the church of Sant’Agostino (13th century), the church of San Pietro (inside you will find a grand organ richly carved).

Just outside the centre stands the Roman Theatre (1st century), well preserved and which looks like a miniature copy of the colosseum; not far away is the mausoleum, a Roman tomb with burial chamber covered by a barrel vault.

On the side of Mount Igino, 5km from Gubbio and 830m above sea level, stands the basilica of Sant’Ubaldo: 15th century and with 5 naves, it houses the body of the patron saint and the large candles used in the Corsa dei Ceri.