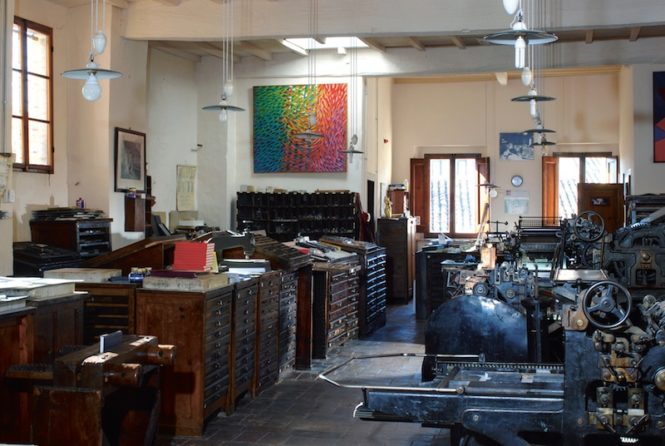 Italy, because of its economic and cultural liveliness, is the country where the technique of printing with movable type (Subiaco 1465), invented by the German Gutenberg in the middle of the fifteenth century, was the first to spread. In Umbria in Foligno, already in 1472, the Mainz cleric Johan Numeister printed the first edition of the Divine Comedy in 20 copies. In Perugia, seat of the University, there is Francesco Cartolari’s printing works. In Città di Castello, in 1538, on behalf of the Priors, the Libro degli Statuti (Liber Statorum) was printed by the itinerant printers Antonio Mazzocchi from Cremona and the Gucci brothers from Cortona. For more than 2 centuries the production was scarce and of an exclusively religious nature: only from the 18th century new printing works were established in the town by G.Manescalchi (1716-1743), O. Bersiani (1765-1775), F.Toppi (1778-1789). At the end of 1799 the printers Francesco Donati and Bartolomeo Carlucci arrived in Città di Castello, coming from Assisi, to set up a workshop in the premises above the ancient church of S.Paolo (XIII century) which had previously been a convent and then a prison. The typography immediately distinguished itself for its considerable capacity and for the production of books and prestigious publications, which made it so successful that many orders were received from nearby towns and cities. After Carlucci’s death, the activity was continued by Donati, who introduced the Bodoni characters in 1817. In 1842 the monumental work Le Memorie Eclesiastiche e Civili di Città di Castello, published in 28 files and written by bishop Giovanni Muzi, began to be printed with the wooden press. After the death of Francesco Donati the printing house passed to his son Biagio and from him to his nephew Giuseppe Grifani. So the shop takes the name of GRIFANI – DONATI (GRIFANI – DONATI) and moves towards a centuries-old activity. On Giuseppe’s death it passed to his son Ernesto and from him to his son-in-law Alberto Ottaviani, husband of Elisabetta Grifani and then to his sons Mario and Italo. Giovanni Ottaviani, the current owner together with his wife Adriana, continued the family tradition adding to the typographic and chalcographic production the lithography, exclusively on stone and the binding and restoration of books. Today, traditional techniques and period equipment (Elia Dell’ Orto 1864, Platina Tiegeldruk 1903, Bollito & Torchio 1880, Paolini 1960 Pianocilindrica Werk Augsburg 1910, etc.) are used to produce lithographs and chalcography. Characters and friezes, silographies, galvanotitypes (all original), lithographs, chalcographies, posters, letterheads, business cards, wedding invitations, ex libris.