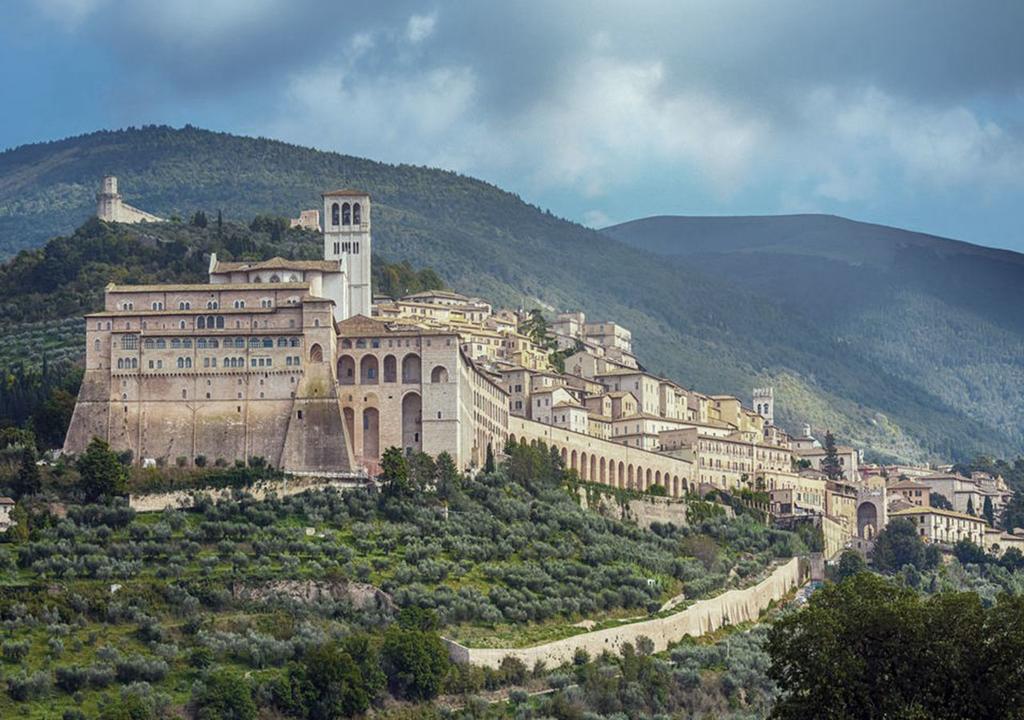 Assisi is situated in a panoramic position on a spur of Mount Subasio (1290 m), overlooking the plain of the mouse and Chiascio. For the magnificent monuments, the suggestive religious atmosphere that pervades it, the mystical memories of St. Francis and the grace of the landscape, it is one of the most frequented places of Christianity (in Italy, second only to the Vatican State), as well as a pilgrimage destination (the Assisi Way ends there). The main entrance to the city is through the 14th century Porta San Francesco; a little further on you reach Piazza Inferiore di San Francesco, all surrounded by a 15th century portico. At the end of the square you can admire the gothic portal of the Basilica of St. Francis, superb sanctuary of faith and art, formed by two overlapping churches. From here you can access the lower church, equipped with several richly decorated chapels; the right arm of the cross is adorned with frescoes by Giotto and Cimabue, the left one with frescoes by Pietro Lorenzetti. In the crypt below, in the room of the ancient tomb of St. Francis, consisting of four rough walls, you can see the simple stone urn containing the saint’s body. The upper church is a slender and luminous construction that contrasts with the gloomy austerity of the lower church. The walls are covered with paintings by Cimabue and, above all, the famous cycle of 28 frescoes of the Life of St. Francis by Giotto. The Piazza del Comune is the city centre, overlooked by numerous palaces and a Roman Temple of Minerva. From the square starts Via San Rufino, which leads to the Cathedral of San Rufino (XII century): the interior was completely renovated in 1571; from the left aisle you can access the Roman cistern, located at the base of the bell tower. From the outside of the cathedral you can enter the crypt: located under the building, there are remains of paintings dating back to the year 1000 and a Roman sarcophagus that served as a tomb for St. Rufino (3rd century martyr). From the cathedral you can quickly reach the top of the hill, crowned by the Rocca Maggiore, a 12th century Germanic citadel, where Frederick II of Swabia stayed for some years. Finally, it is worth going to Piazza Santa Chiara, where the church of Santa Chiara stands (1257, it has a very elegant rose with two turns of columns and arches) and to Piazza San Pietro, where there is the church of San Pietro (in Romanesque-Gothic style). From Porta Nuova you can reach on foot (15 min) the convent of San Damiano (where in 1225 St. Francis composed the Canticle of the Creatures.

From Porta Cappuccini there is a 4km road that leads to the Eremo delle Carceri (800m above sea level). The first nucleus of the hermitage was a small church surrounded by caves, in which St. Francis and his followers dedicated themselves to a life of prayer and contemplation. Walking in the forest along the so-called viale di san francesco, you reach the “natural temple of the hermitage”, beyond which the caves can be visited.

On the plain in front of Assisi is the mighty basilica of Santa Maria degli Angeli (1569), built to incorporate and “protect” the famous Porziuncola Chapel (where St. Francis founded the Franciscan Order in 1208); at the beginning of the Presbytery is the Chapel of the Transit (the infirmary cell where St. Francis died).