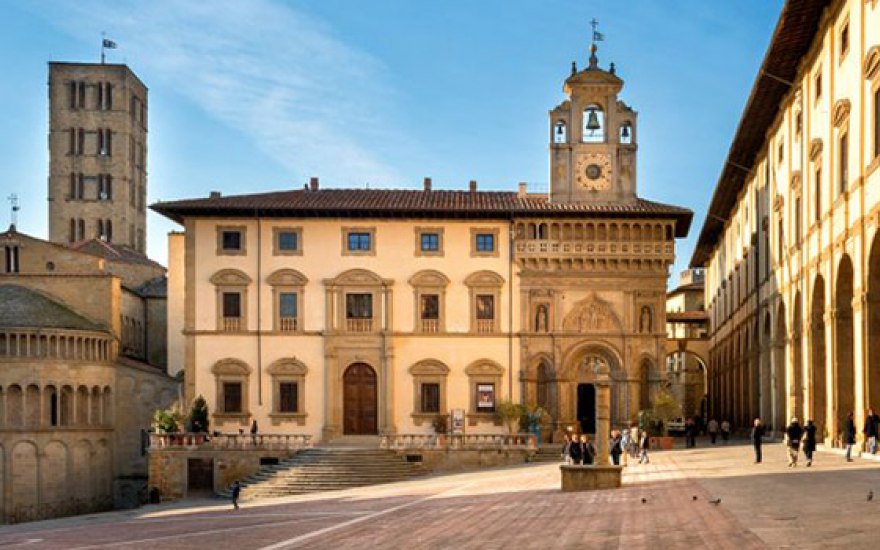 (40min from the farmhouse)

Lying on the slope of a hill in front of the plain where the Valdarno, the Casentino and the Valdichiana bloom, Arezzo is renowned for its goldsmith and textile production. The centre of the city and Piazza San Francesco, where the basilica of St. Francis is located, in Tuscan Umbrian Gothic style of Franciscan inspiration; the walls of the choir are adorned with a famous fresco by Piero della Francesca depicting the Legend of the True Cross (1453). On the right stands the parish church of Santa Maria, of the XII century, in Romanesque style; the interior has three naves with large ogival arches, in the presbytery there is a famous Polyptych executed in 1320 by Pietro Lorenzetti. Along the side of the parish church, the Via di Seteria, interesting for its row of medieval shops, leads to the scenic Piazza Grande. Immediately to the left is the fabulous Romanesque apse of the parish church, beyond which follows, preceded by a flight of steps, the Palazzo della Fraternita dei Laici, with its façade in Gothic style but with pleasant Renaissance elements. On the top of the square dominates the grandiose Palazzo delle Logge, designed by Vasari (1573). Every year the traditional Giostra del Saracino (Saracen Joust) takes place in Piazza Grande, a medieval re-enactment in costume during which the different districts of the old town challenge each other. In Piazza Fossombroni stands out the gothic church of San Domenico (end of the 13th century), which contains some lovely 14th and 15th century frescoes, but above all a Crucifix by Cimabue; not far away is the Casa di Giorgio Vasari, seat of the Masariano Museum and Archive. In Via San Lorentino there is Palazzo Bruni-Ciocchi, with an elegant courtyard, which houses the Gallery and the Medieval and Modern Museum, where there are works by the greatest exponents of the Arezzo school of the 15th and 16th century, first of all: San Francesco di Margaritone d’Arezzo, Madonna della Misericordia by Bernardo Rossellini, Adoration of the Child by Signorelli. In Via Margaritone there is the entrance to the Roman amphitheatre, a stone and brick construction of the second century A.D., elliptical in shape with the main axis 121 metres long. On the right of the amphitheatre stands the former monastery of San Bernardo, seat of the Archaeological Maecenas Museum; to be admired in particular is the collection of coral vases, decorated in relief.